iOS developers: maybe not a rare breed after all?

So, how scarce are iOS developers. Or maybe, how bountiful? I think I got a rough glimpse on this matter, as Apple's Game Center was shining some light on it. Based on this, I am going to venture a wild guess that between a half and one percent of all iOS gamers have a developer account, and can thus be considered to be developers themselves. If this figure is correct, it is a lot more than I intuitively expected it to be.

To aid developers with the integration of Game Center in their apps, Apple has deployed a dual infrastructure. There are the production servers, for use by the population in general. There is also the Sandbox environment, where developers can submit test-scores, and see if their code is working as expected. Once a developer starts using this Sandbox environment, it is very easy to use the Sandbox by accident for all other gaming as well (thus, not when testing their own app, but enjoying a random app-store hit for instance, to relieve some stress). If this happens, scores from test users show up in the Sandbox leader boards of other developers.

So here are some statistics from the leader boards of my game the little crane that could. On the leader board for the second level of the game (basketball court), there are as of today:

This ratio would indicate that 0.7% of all iOS gamers are iOS developers. Now of course, there are some other factors that may skew this measurement. Let me list a few of them for you:

First, there is the fact that some developers actually may log out of the test account before playing my game. I must say it is a lot easier to forget, than to actually switch accounts. This factor would cause the developer-gamers to be under-reported.

next, there is a difference of adoption rate(*): a developer may be more likely to have signed up for Game Center than a general gamer. This is simply because as a developer, he should be aware of these kind of things. Ignoring Game Center impacts a developer harder than it would a casual gamer who may prefer to stay with OpenFeint for instance. This factor would cause the developer-to-gamer ratio to be over estimated.

Last, it must be mentioned that it is conceivable that there has been a problem with Apple's servers. If general gamers were routed to the sandbox server, even for a small period of time, my estimation would be completely compromised, as the developers would be grossly over-reported. If this were to be the case, the margin of error would make my estimate useless.(**)

(*)Speaking of adoption rates of Game Center by gamers: it appears low to me. My game saw well over 1M downloads, yet the most played level in my game only sees 314K names. Is it because the gamers don't bother to finish this level, or do most gamers play without a Game Center account?

(**)This scenario would be unlikely though, as I have been steadily adding new levels to the game. These new levels show a similar ratio. This is evidence against incidental server problems.

Work around for xcode 4.0.1 crash in NSATSGlyphStorage

If you encounter a crash each time you try to load your xcode 4.0.1 project, you may be facing the same xcode4 bug that I experienced. I managed to work around it by deleting a file. From the call stack I gathered that the crash occurred during the layout of the source code editor. So deleting the layout info stopped it from crashing upon start up. if it happens to you, delete the file: 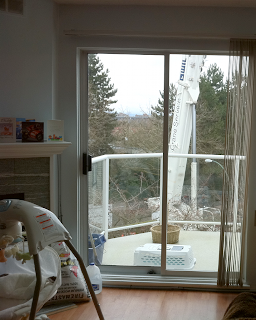 Look at what payed us a visit this afternoon. Not the little crane that could, but its bigger brother, the big crane. It is laying some underground transmission lines under Laurel street for BC Hydro, the electricity provider here in Vancouver.