From game programmer to aerospace pioneer

So, what does a programmer do when he creates some of the most successful and influential computer games of his age? Well, the average reaction of young guys striking it rich, is buying exotic sport cars, and play with them. But what if you get bored with those? Where do you get your kicks now? Well, when John Carmack got bored with Ferrari's, he moved on to rockets, and started his own aerospace company.

Pioneers like Charles Lindbergh were spurred on by prize money ($25000 in his case). John Carmack's company just claimed a $1000000 prize known as the x-prize. It is a lot of fun following John Carmack's blogs about his progress: how he bids on antique russian space suits on ebay, in the hope he can reuse them for his manned spaceflights. (Unfortunately, he could not). He's an inspiration for my generation, and lives the dream of every technophile. Watch the video to see what his creation is capable of. 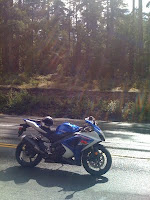 Suzy made her first trip to Vancouver Island. To meet my parents in Tofino, I rode out this labourday weekend. The forecast was light rain, but as soon as I deboarded in Nanaimo, a heavy downpour started. It's a good thing I packed a rain-overall. The highway 4 that goes to Tofino is a beautiful road, but treacherous when wet. So I did not get to enjoy it to the fullest. Shortly before the town of Port Alberni, I came upon jammed traffic. I spent an hour or so waiting for rescue services to clean up an horrific accident. A trauma heli was flown in, together with 4 ambulances. When the road was opened again, I could see the car tracks going straight into the lake. It served as a stern reminder to be cautious (which I always am on the motorbike, especially when the road is wet).

I was able to get lodging and ferrying easily enough, probably because of all the rain. Most accommodations were full, but the Maquinna Hotel had vacancies, which was a decent place. It is sober, but it serves its purpose. During the first night I had a big scare. I was awoken in the middle of the night. At first I thought it was the telephone, but it turned out to be the control of my bike alarm. After I bought Suzy, I fitted her with the most expensive alarm that the dealer sold. After all, I learned my lesson in Lelystad, where my sv1000sz (a rare edition from Suzuki) got stolen. The alarm on Suzi will actually transmit a signal back to my keys, so that not only the alarm goes off, I also get a signal if I am within a few hundred meters. After overcoming the drowsiness, I got dressed quickly. No baseball bat at hand, but damn, I was mad. When I got outside Suzy was still there. A loud group of drunks were a little further down the road. I think one of them sat on Suzy, or kicked a tyre maybe. Anyway, I observed the scene for a while, and then went back to sleep.

The ride back was pretty damp as well. Which is a shame, because the opportunities of using all 185 horses are so rare. And Suzy's engine feels so much smoother when it gets a little throttle. It can be a drag to drive hundreds of kilometers with the throttle basically closed all the time. However, I did appreciate her reliability as she did not miss a single beat, even in the heavy downpour. One of these days, it will be a proper road trip, in the dry, with wide open roads. According to specs, she should hit 300 per hour, but so far, that has been academic: it is an unrealized fabled potential. 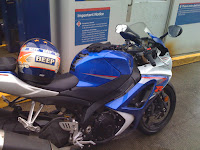 Suzi at the toll booth. 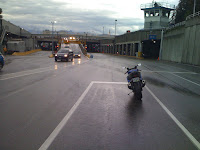 Suzy ready to board. 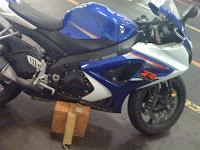 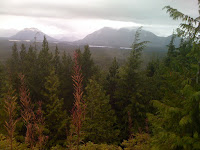 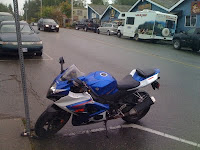